So my personal projects were going a variety of directions. I have my father in law’s S80, the V50, the Xc70/v70, and now the XK. The XK took the predominant amount of my time this weekend as getting it mobile on it’s own power was the highest priority. As previously noted the car upon arrival would not start. I was hoping this was due to the shock being broken, so that was the goal for the day.

Here is the car when the day started. The upper ball joint broken complete, the control arm badly bent, and the shock in pieces. I took the wheel off upon arrival to take stress off the brake lines and abs wires holding the hub sort of in place.

Here are the broken parts removed from the car and the replacements ready to get put together. 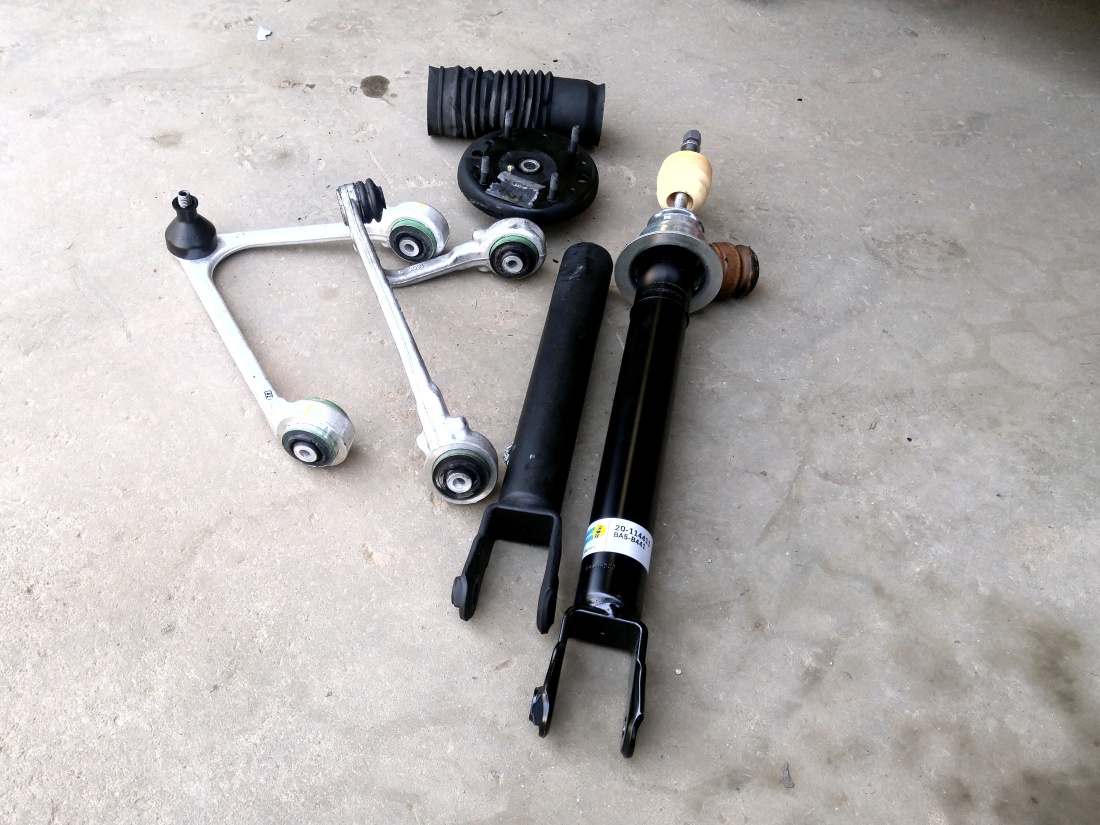 The upper control arm was the wild card of repair. Jaguar puts a premium on this arm with a retail of close to $600. Looking around my options appeared to be genuine or Uro. The aftermarket brand has a retail of a fraction of the genuine part, but it’s a budget brand and not really what I wanted to put on the car. On my Super 8 I also needed the upper arms and I found that the Lincoln LS has the same upper control arm and I got a Moog for it. Looking into options I discovered the same control arm is still used for my XK. I did a bit more poking around on the interchange and ordered a Lemforder, which is the OE supplier that apparently is still under contract with Jaguar and won’t sell it to anyone else.

I thought this was a better photo, but upon review of the arms side by side not only are they identical, the Jaguar logo is scuffed off. This is especially curious as I ordered the arm under a Ford part number.

Here is the suspension all together and ready for a wheel.

The car can now rest comfortably on it’s own wheels!

I removed the fender and discovered the reason why it wouldn’t start.

At the portion right in front of the door there is a jumble of stuff, that stuff is the ABS components and it took impact.

The ABS module is intact, but the housing is definitely cracked. When I first removed the fender the module was pushed against the body and the plug was not making good contact. Taking it loose and moving it out of the way solved the no start issue, but I still have traction control and abs faults in the instrument cluster. Time will tell if I need to source an ABS module or whether this one can be repaired. The circuit board is in tact, but the wiring connection seems to still be the issue. I did not go any further as I would need to take the brake lines loose from the unit to get the module off. Meh, I don’t need to go into all that this weekend. Running is good enough.

Another unfortunate surprise is the oil cooler is damaged. 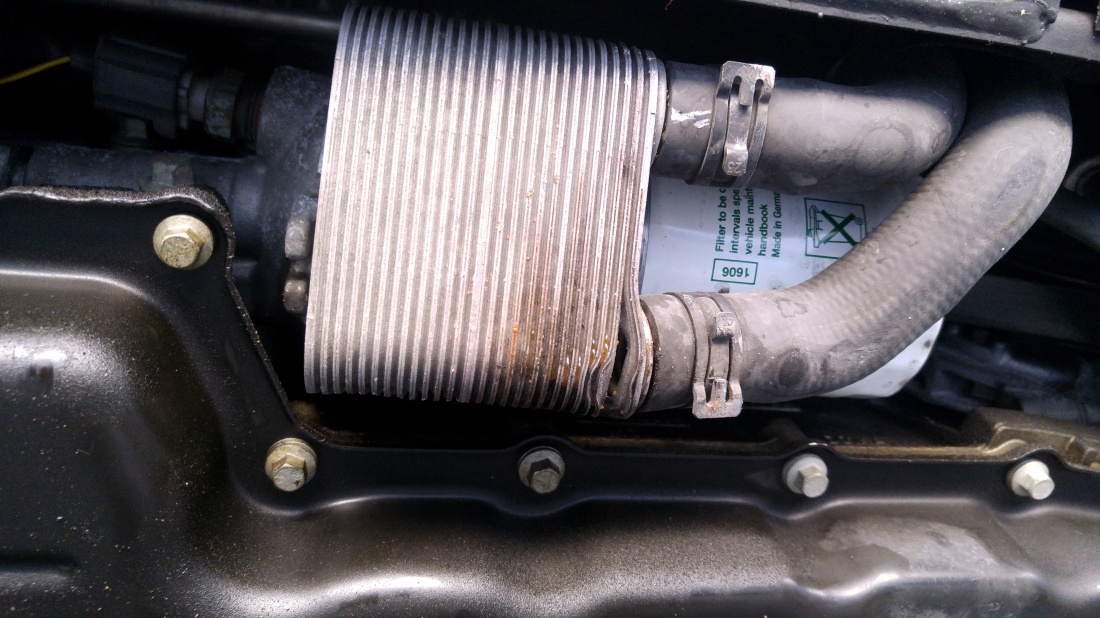 I certainly don’t have another one on hand and I didn’t want to run the car without coolant, so a solution was needed. I broke the nipple off, sawed off the end, and joined the two lines together. 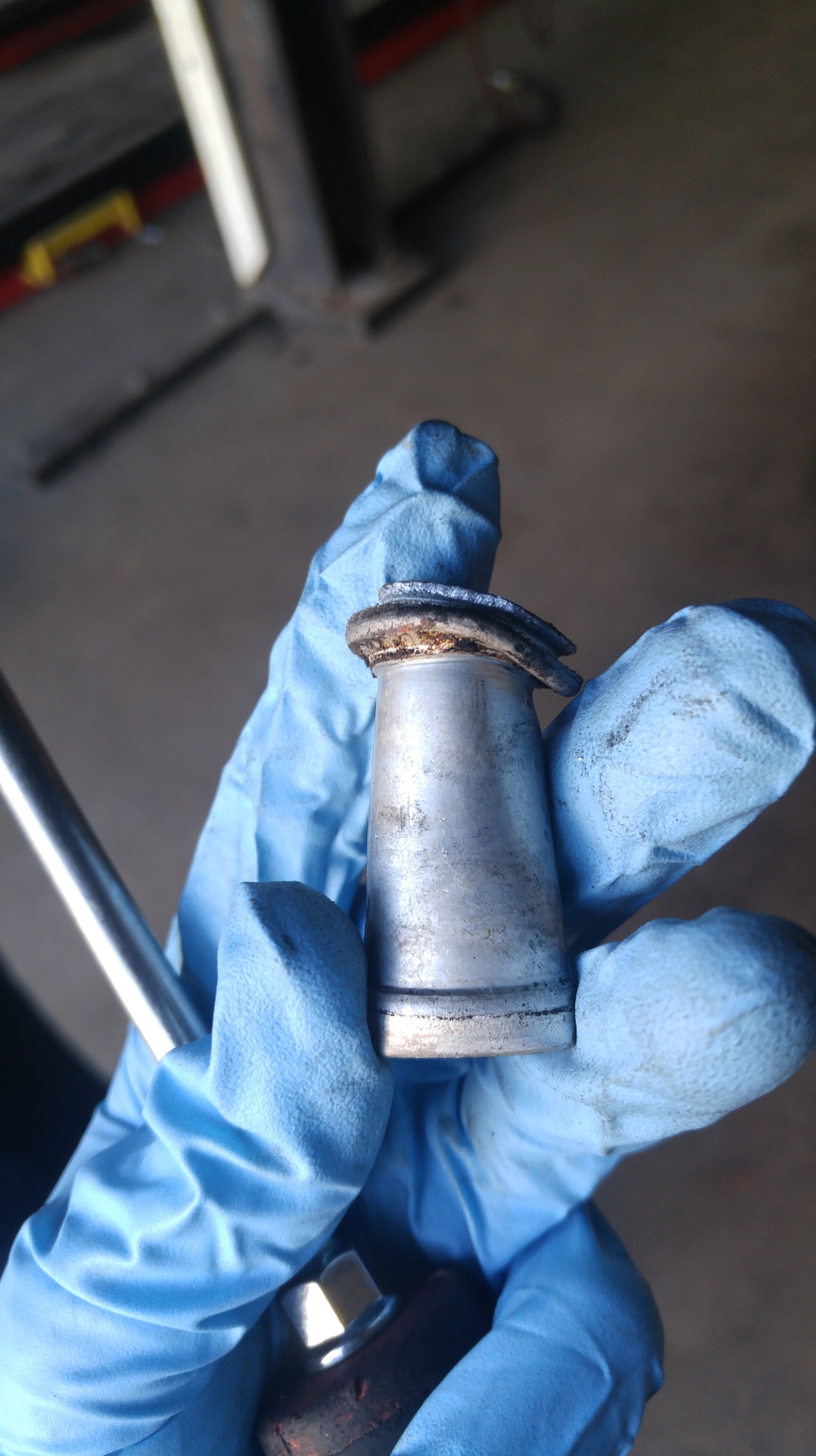 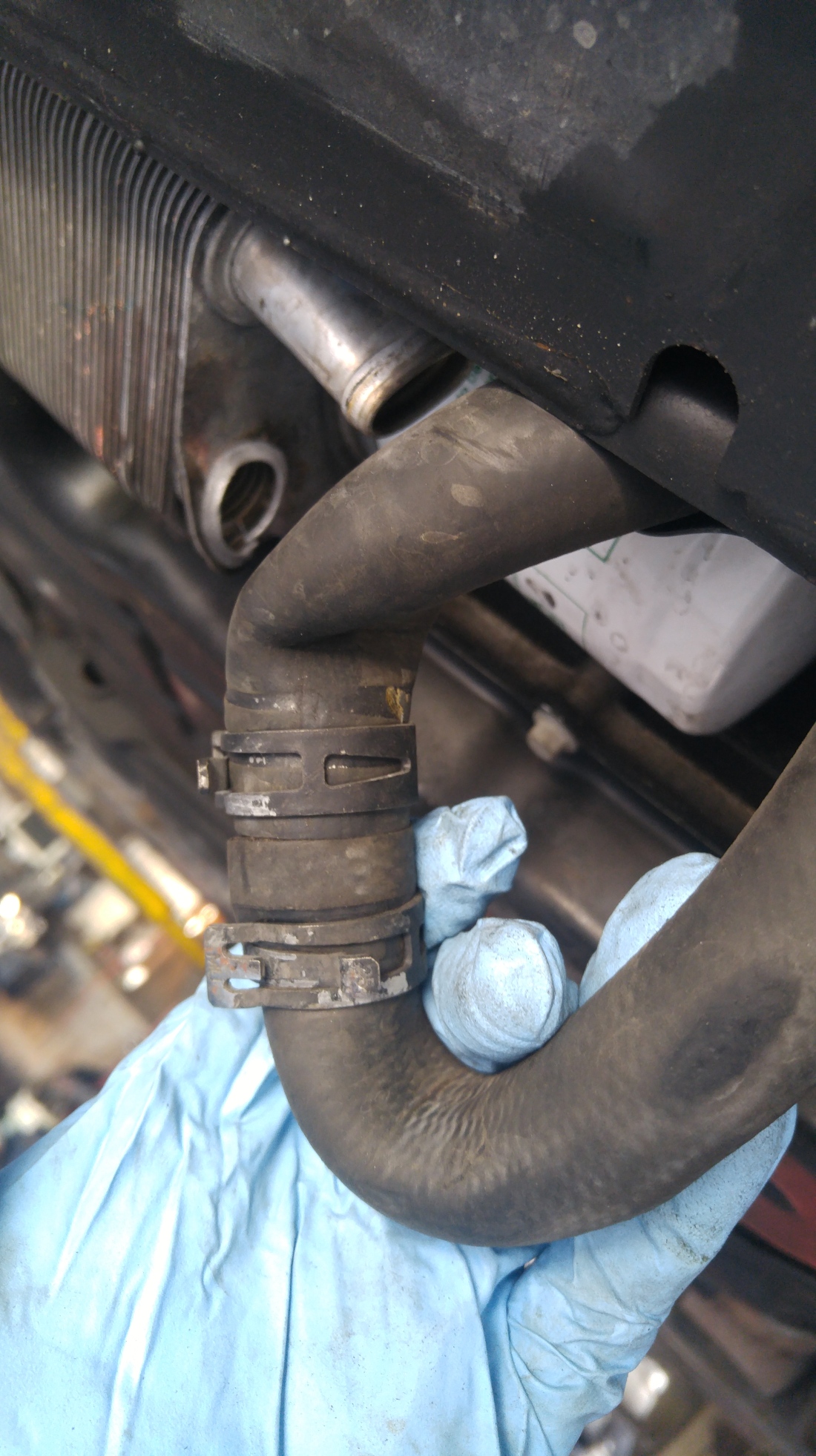 Not pretty, but it does what I needed it to do.

And here it is, up and running!

The V50 was pretty much a bust, especially installing the 9 ½ inch rear wheels running 285/30-20’s. Even running just the 8 ½ inch fronts was just to massive. Haha, so not really a surprise. 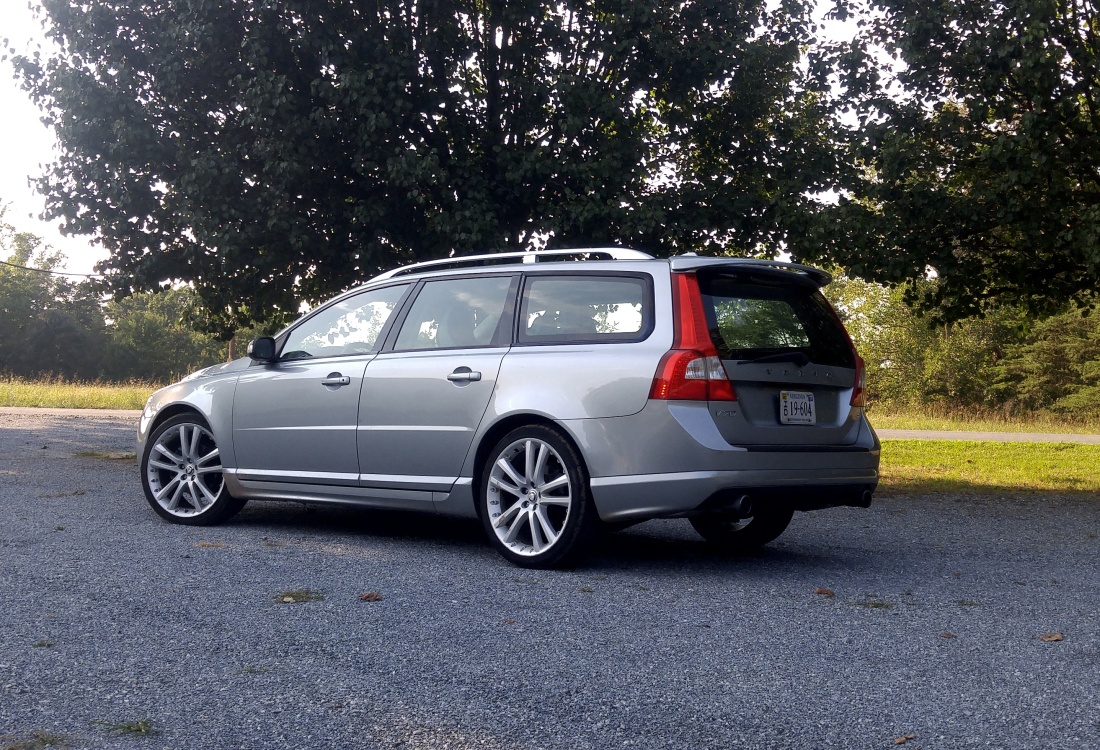 The S80 is prepped for painting. Not really much to see here.

The V50 got a very nice upgrade that payed off far more than I expected. 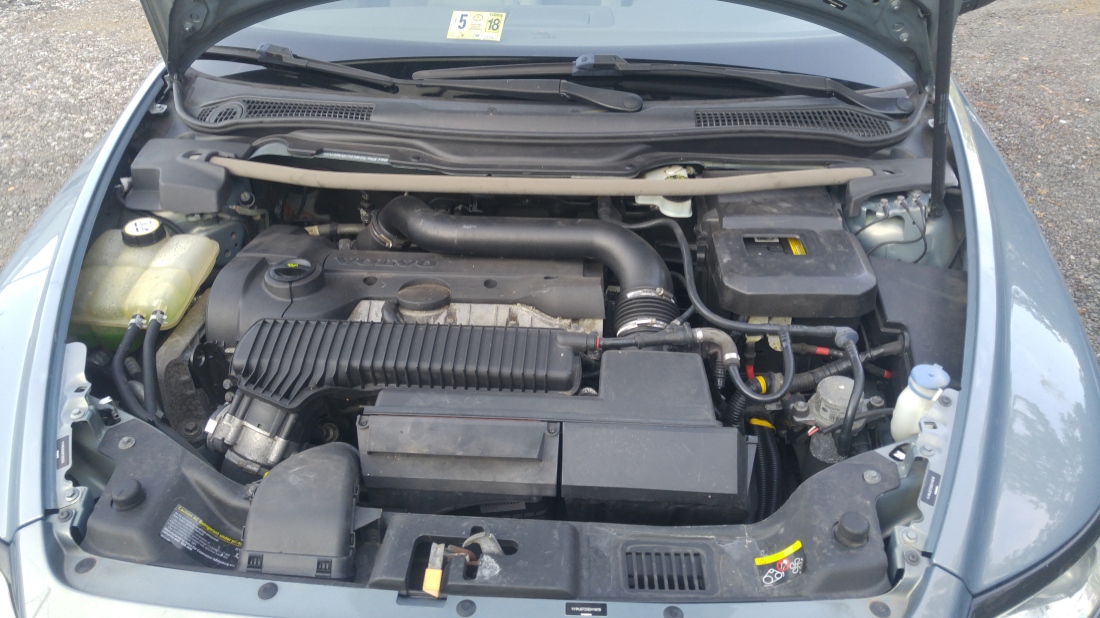 I had installed the strut brace previously and was not at all impressed, but that was, apparently, because I had it installed while the tires were out of balance. Trying again with the tires balanced the difference is striking.

Normally I judge a car’s handling based on how quickly I feel I can safely travel my daily drive to and from work. It’s a road I travel probably 20-50 times a week and I never ever look at my speed while driving on it. I’ve traveled this road quite a number of times on the v50 in the several months we’ve owned it, both with the stock set up, with the IPD swaybar, with higher performance tires, and now finally with the chassis brace. All these elements have transformed the car. Previously I would describe the power output adequate for the suspension, but now I feel it could easy control another 50 hp. I found I’ve carved these back roads with the same speeds as a similar year BMW. BMW generally holds the highest speed records as their suspensions on average are some of the best and I have very few places that I can or even want to open a car up. It’s all about suspension handling and while the V50 is certainly more harsh than the average BMW, I will call it an acceptable compromise and I always sit on the GT side of the sports car equation.

I’m re-learning my driving experience as instead of taking a long turn and holding the wheel at one point I now am having to make adjustments to my steering angle because it steers so much sharper now.